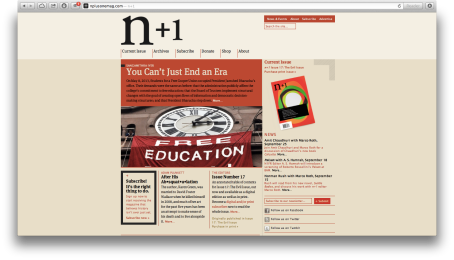 I’m really glad n+1 has been such a supportive home for my writings on Cooper Union.   In April, I had published a piece “Save Cooper Union” which provided some history of this institution and tracked the current situation from October 2011, up until March 2013, right before the tuition announcement in April.  A new piece called “You Can’t Just End an Era”  is up which discusses what’s transpired over the past several months, and evolved into a piece about governance.

The past couple years, I’ve been reflecting a lot on my Cooper education. The benefits were not just the four years spent there, but the possibilities it allowed for after. Cooper Union afforded me the financial and intellectual freedom to pursue passion and purpose, and not be beholden to debt or corporate empires. It allowed me to take risks, to quit jobs, to think critically about the political and economic systems that shape our lives, and to explore the things that inspired or irked me.

My time over the past 10+ years  has been split between writing, activism and public service. This admittedly also kept me away from all that was happening at Cooper Union from when I graduated in 1999 to the fall of 2011, when Bharucha first publicly announced the possibility of tuition. Since then, however, Cooper Union seemed to trespass into the other compartments of my life at all hours of the day. My work on municipal water supply could be traced back to Peter Cooper who was one of the earliest proponents of securing the Croton Watershed. A friend in my monthly writing salon, was talking about cultures of remittances as part of her anthropology doctorate. I wondered if that was like alumni giving. “Not everything is about Cooper Union,” my husband likes to reminds me. And yet, I found myself making connections between the situation at Cooper Union and my prior activism, as well as with all the news I was hearing, whether it be the rising cost of student debt, the imbalances in academia with overpaid administrators and underpaid faculty, or the growing inequality of wealth nationally and internationally. It all underscored the need to preserve and replicate a model for free education that would be open and accessible to all.

I’ve spent countless hours going through archival documents from the college’s beginnings, and so much of the founding principles resonated then and now, far beyond the Bowery. As articulated in an annual report from 1878: “Narrow is the actual sphere and limited means of such an institution, with principle and example it sets forth is co-extensive with the wants and interests of the whole country.”

The fight to save Cooper Union is about something much bigger. It is about a pursuit of truth and showing another way is possible. For anyone familiar with trying to mend the rift between the ideals and lived reality of a beautiful yet imperfect institution, there is something that is going on here that speaks to a larger truth. What can we learn from this? How does a small group of individuals create change?

Click here for the n+1 archive for these stories.